The History of Women in Yoga

I’ve just finished recording the “History of Women in Yoga class’ as part of Return to the Self’s online Prenatal Yoga Teacher Training.  This history is rich and fascinating and essential to understanding Prenatal Yoga practices and contemporary modern postural yoga.  It is also very important to absorb the power politics of modern yoga, now we find ourselves in the murky waters of endemic power abuses.

Finding the Yoginis in history, where are the women in Yoga? 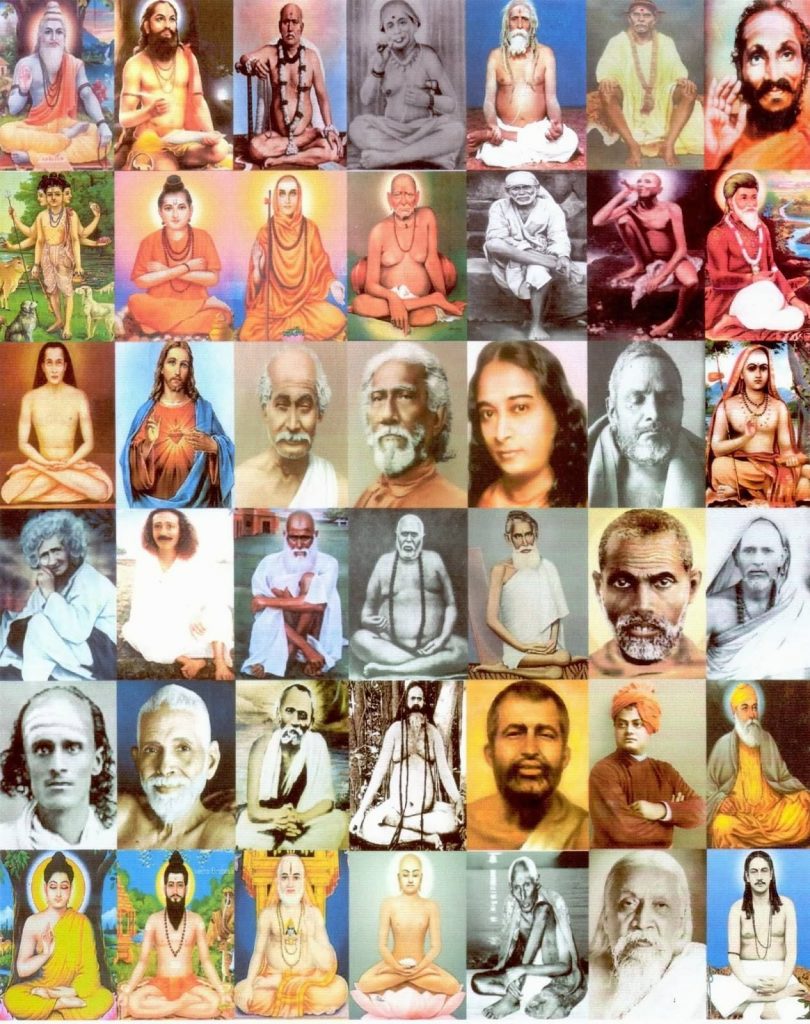 The history of yoga is not an exclusive men’s domain. Although the thread of orthodox Brahmanical Vedic Yoga and Aestheticism may be an exclusive club, and women perhaps were in the kitchens of the world, the more egalitarian stance of Tantra includes women teachers and priestesses throughout the ages. Bhakti Yoga & Karma Yoga has the presence of women at the forefront throughout history.

I am so lucky to have got a brilliant perspective on all of the threads that influenced yoga from wise and compassionate Emil Wendel on my first Brahmani 500 hour Yoga Teacher Training. 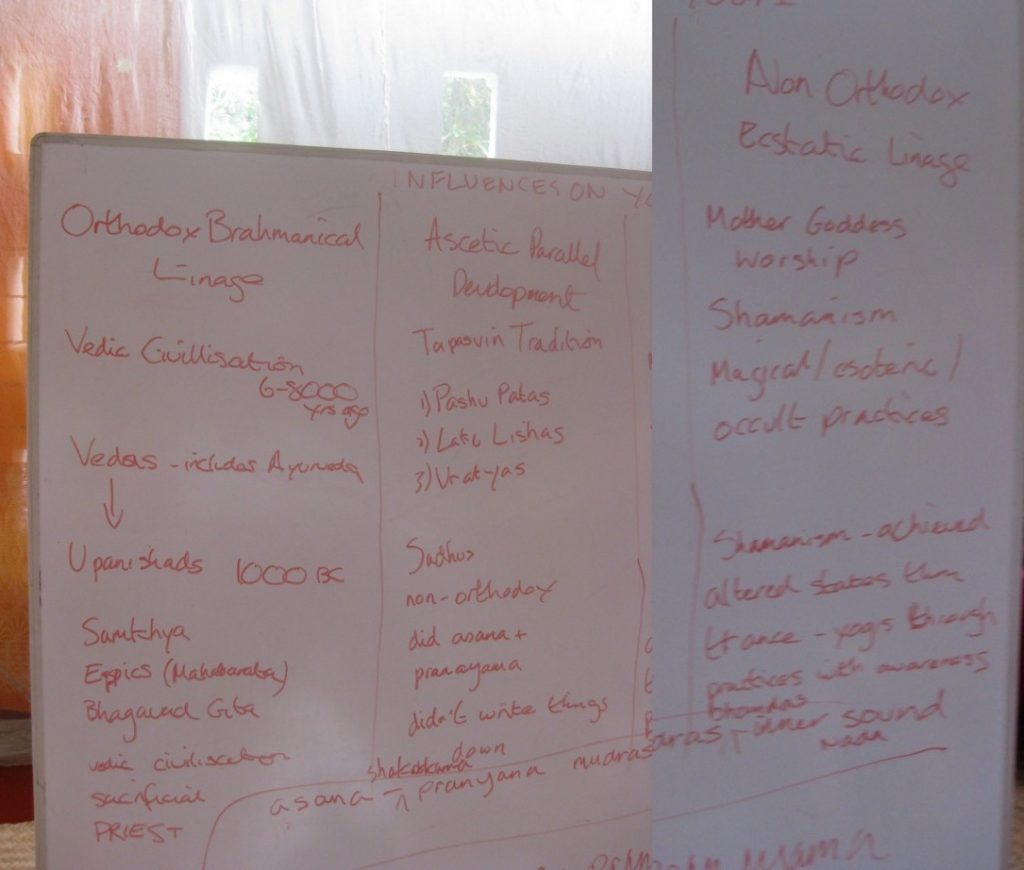 So let’s look, and reposition women back into the history of yoga.

Tantric practices (‘tan’ from the root of expansion – tanoti and tra from liberate – rayoti) are varied with multiple linages such as Sri Vidya, Kashmiri Shaivism & Siddha Yoga as well as the Buddhist thread, Vajrayana Buddhism.  In the 6th century, the growing middle classes of India were alienated by caste structured Vedic/Brahmanical traditions and monastic male Buddhism.  It was in this period where tantra took hold and vast quantities texts were written between 800-1000AD (most which are not in the public domain and those that are, written by one Western man in the early 20th century (John Woodroffe). 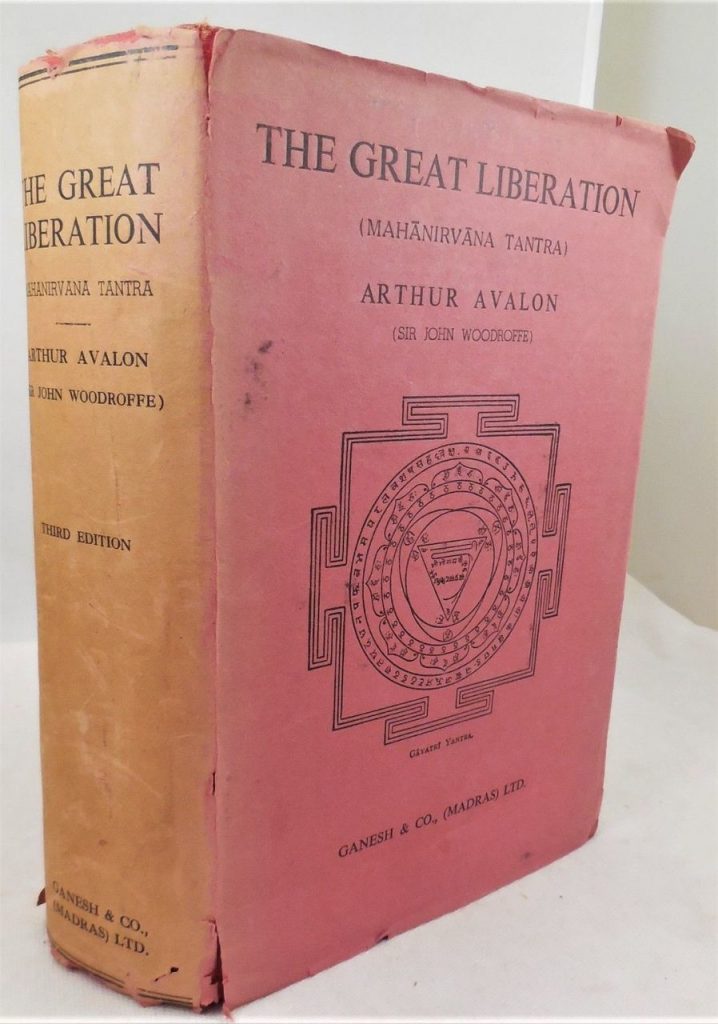 John Woodroffe’s (Arthur Avalon) 1913 translation of the Great Liberation (Mahanirvana Tantra): “These teachings tended to support and validate the practices of Tantra, which in their classical form are more oriented to the married householder than the monastic or solitary renunciant, and thus exhibited what may be called a world-embracing rather than a world-denying character. Thus Tantra, especially in its nondual forms, rejected the renunciant values of Patanjalian yoga, offering instead a vision of the whole of reality as the self-expression of a single, free and blissful Divine Consciousness under whatever name, whether Śiva or Buddha-nature.”

Tantra was vibrant, immediate, and taught that enlightenment was available in this life.  The divine was seen not as an abstract deity but an all pervasive presence, that each of us are not just part of but  ‘the whole of’.  The idea is that we are a microcosm of the macrocosm.  The body was the tool to enlightenment (including sexuality) as opposed to the practices of the sadhus and holy men of bodily austerities (sadhus & sannysins).  Moksha or liberation was the focus, as opposed to hatha yoga where the practices themselves take centre stage as the world became more and more material in Kali Yuga.

From a tantric perspective all our bodily functions (the beating of the heart, the energy that fires our muscles) are inherently feminine.  The feminine is power and when the masculine wants power – it must be drawn from the feminine.  Creation take places within a woman.  This given, Shiva and Shakti energy are part of both male and female genders (think yin/yang).  Tantra offers us a direct connection to the inner force that can transform consciousness (the Shiva energy) and lift Kundalini energy (dormant Shakti) up the spine (as represented by the serpents below). 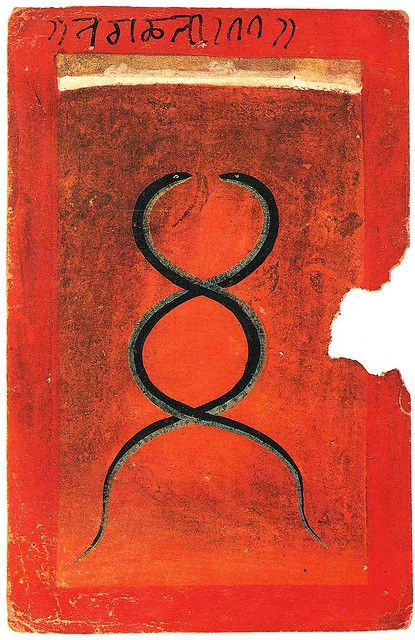 A pair of snakes, symbolic of Cosmic Energy

The commonalities that defined tantra included:

Historically, women were excluded from hatha yoga, but there is strong evidence to suggest that women were active as teachers in Buddhist and Hindu Tantric practices.  Women are placed in tantric philosophy as spiritual teachers

Tantra reveres the divine feminine in every sense, in goddess worship and the veneration of women’s bodies.  10th century Yogini temples as in Madhya Pradesh and Orissa venerate the siddhi of menstruation which is echoed in hatha/tantra texts of a later period (Hatharatnavali – 1625) 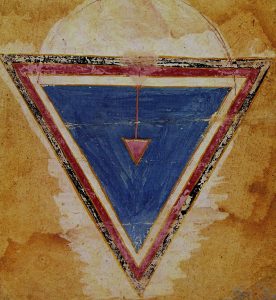 Yoga is rich in the history of women bhakti yoginis as devotional spiritual saints, spiritual leaders, revolutionaries and activists.

Lalleshwari (Lalla Ded) (12th century) was a mystic poet from Kashmir who renounced the world, a true Mystica and essence of Bhakti, a revolutionary reformer and an idealist empath. She made the esoteric accessible.  Her poetry: 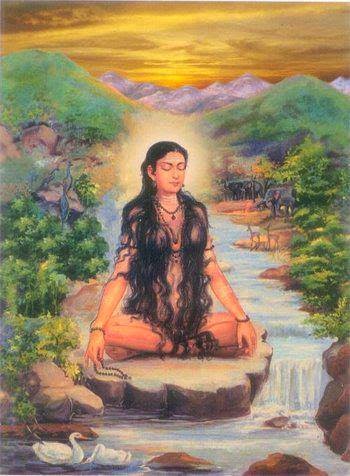 Dance, Lalla, with nothing on
but air: Sing, Lalla,
wearing the sky.
Look at this glowing day! What clothes
could be so beautiful, or
more scared?’ 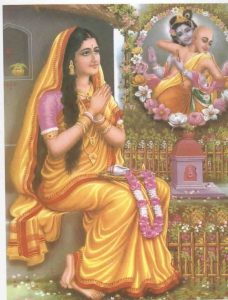 Anandamayi Ma (1896 -1982) in more recent history, is my most cherished female yogini.  She was born a devotee and possibly a samadhi dweller.  He story is one of profound bliss and complete devotion and she attracted many millions of followers.

Contemporary Bhakti Yogini Amma, epitomises the Bhakti path, having hugged 33 million people since the late 70’s (sometimes in marathon 20 hour stints) and as an activist and Karma Yogini with her vast and impactful charitable projects.

Yoga crosses to the West, supported by the Feminine

Yoga would not have risen in the ‘West’ had it not been for European and American women who followed, facilitated, adopted and became disciples of those Indian men/gurus.

Russian Helena Blavatsky, founder of the Theosphical society, created an interest and reframing of India and reveneration of esoteric knowledge.  She translated the Hatha Yoga Pradipika (although with some scepticism on hatha yoga) amongst others, as well as publishing her own insights, such as the secret doctrine. 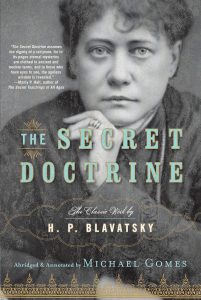 British Political Activist and Feminist Annie Besant, Blavatsky’s successor, was instrumental in continuing Blavatsky’s work as the new President of the Theosophical society .  She also created the foundation for the revival of yogic knowledge, ‘discovering’ and adopting 14 year old Jiddu Krishnamurti. 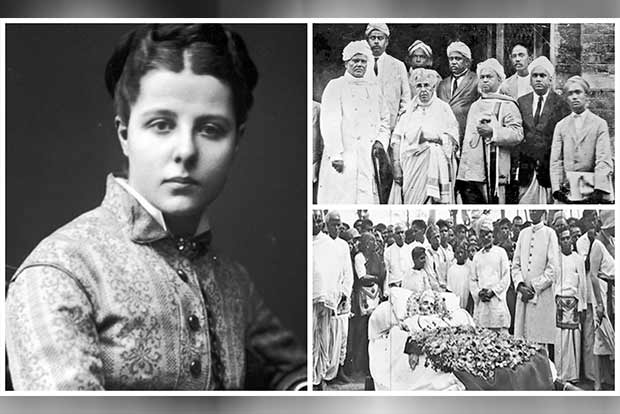 Swami Vivekanada’s popularity and spread of Yoga following the seminal 1893 Congress of World Religions can be attributed to the support and following he gained in Western Women. Irish Margaret Noble became sister Nivedita, disciple of Vivekananda and close associate of Sarada Dvi (Ramakrishnan’s wife and devotee).  She is known primarily for her Karma Yoga and for her writing, including texts on the divine feminine (Kali).

Paramahansayogananda (of Autobiography of a Yogi fame) was also supported by many American women, many becoming lifelong disciples, and now a full documentary (Awake, the Life of Yogananda) documents his life.  The Self Realization Fellowship in the USA spread to include over 500 missions 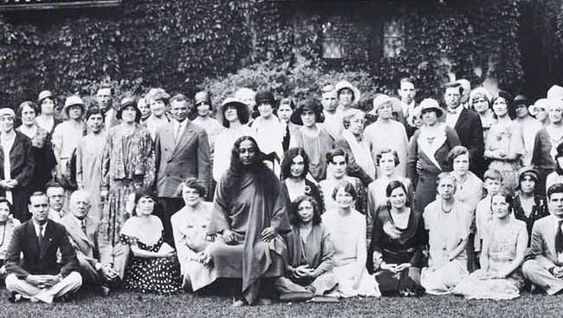 The first women yoga teachers in the 20th century

By far the most significant of all female yoga teachers, and the most influential of the 20th century, was Indra Devi.  Indra Devi was taught by the grandfather of modern yoga, Krishnamacharya (a contemporary of BKS Iyengar and Pattabhi Jois).

Indra Devi (born Eugenie Peterson in Latvia) was an actress who went on to marry a diplomat.  Her subsequent travels in India connected her to Krishnamurti and then later to Krishnamacharya.  Whilst at first refused studentship (a woman and a Westerner), she persisted. Krishnamacharya is quoted as saying, “I think that if we don’t encourage women, the great Indian traditions will die.  Trained by Krishnamacharya, she went on to spread yoga to the USA and taught in Hollywood, =including to famous women such as Greta Garbo.  She set a tone for the Wellness movement, publishing ‘Forever Young, Forever Healthy’ in 1953.

The hippy trail to India

In the 1960’s and 70’s, other American and Europeans, including women, began to travel to India to look for a guru and yoga expertise.  Nancy Gilgoff was one of the earliest female students of Pattabi Jois who followed Krishnamacharya in teaching women.

By the 80’s and 90’s in large numbers of women were flocking to India to learn in Mysore.  Some of the most famous and popular teachers in the world now, originally studied in Mysore including Shiva Rae, Sharon Gannon (Jivamukti Yoga) and youtube/instagram celebrities such as Kino McGregor, one of the most famous and prolific teachers in the world. 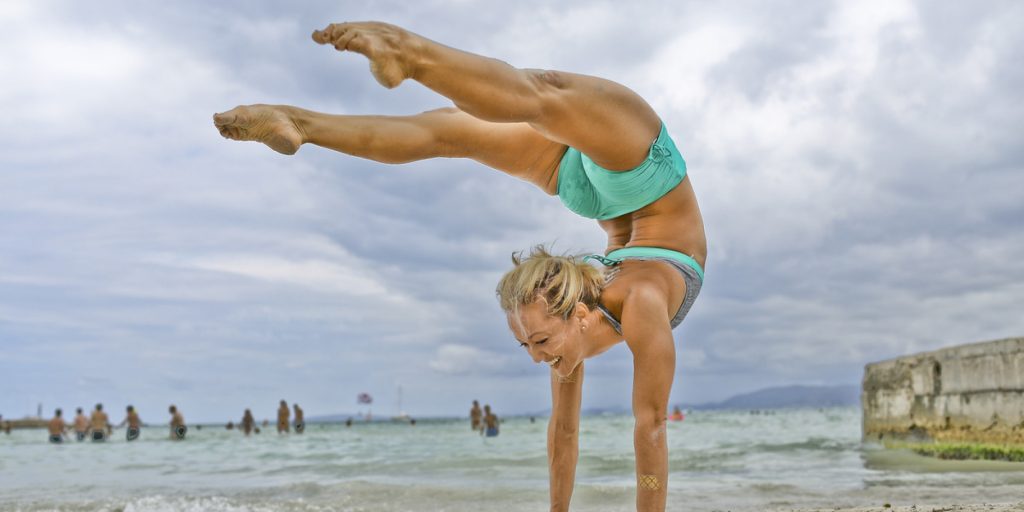 However, it is notable that some of these teachers (Shiva Rae, Sharon Gannon) feminised the practices of Ashtanga, creating Vinyasa movements with less structure and more fluidity in poses and teaching style whilst some kept teachings ‘pure’.

BKS Iyengar and Swami Sivananda also had many female teachers sharing practices in their respective lineages.  Geeta Iyengar published ‘A Gem for Women’ in  2002, offering modifications for women, but still very much within the framework of her father’s teachings.  German born Swami Sivananda Radha, rose to a become a very significant teacher in the Sivananda lineage opening ashrams in Canada and starting ‘Teacher Trainings’ (Yoga Development courses) as well as writing extensively.

Me Too: Yoni Shakti: The Movement

The 21th century, has seen a rise in clarity of the widespread sexual and power abuses of myraid lineages of male hatha yoga.  Many have been abused and there are many victims.  Yogis such as Bikram Choudhary, John Friend, Satyananda Saraswati and Amrit Desai (creator of Kripalu Yoga) as well as Pattabhi Jois to name just a few have all been accused of abuses with many law suites against them.  Paradigms of power protect many of these gurus, which is very apparent in the case of Bikram, who is still teaching and has not been encarcerated although there are many strong cases against him (watch the Netflix documentary ‘Yogi, Guru, Predator’). 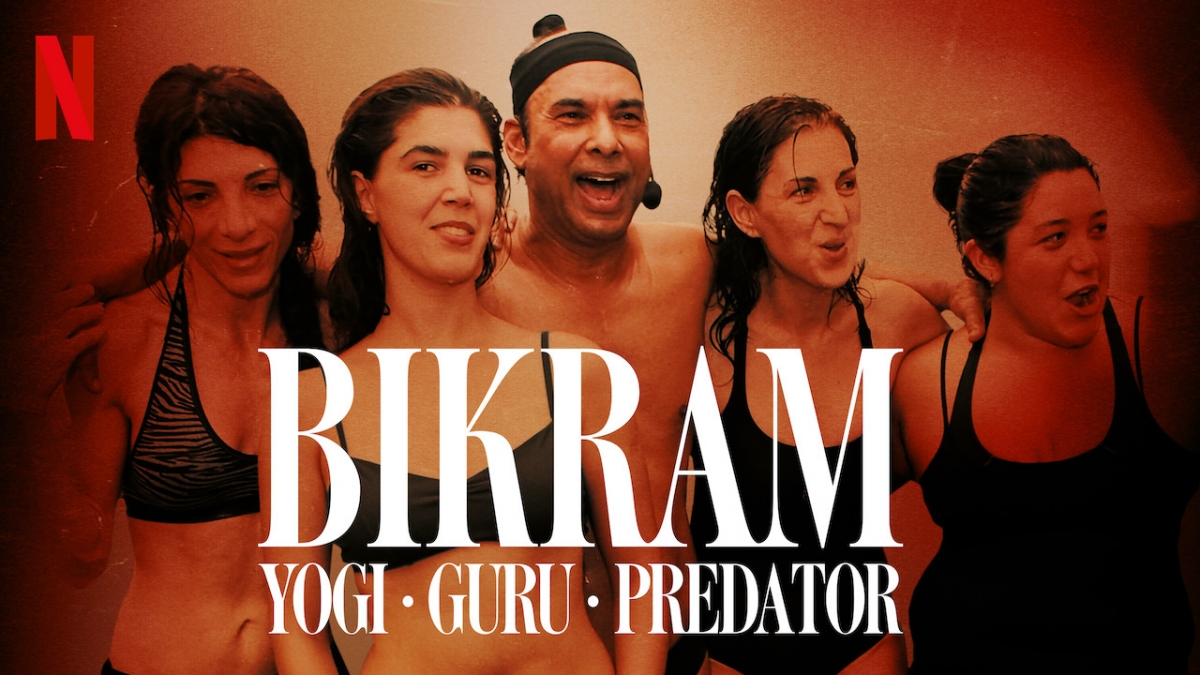 It is also clear that a ‘Womb Yoga Manifesto’ is essential to modern yoga.  Women’s bodies have different needs and a holistic approach to yoga respecting and honouring female life cycles should, by rights, be at the core of yoga, if yoga is now practiced by so many millions of women and make up a good 80% of the practitioners of the world.  For this reason, I promote prenatal yoga, as a source for women to be empowered in their own bodies and for their own inner knowing to be place before lineage.

Contemporary women activists and Yogini’s are now leading the response to the power and sexual abuses apparent and endemic in the lineages of yoga and our patriarchal paradigm. Women’s voices are rising as yoga practices include a movement to reclaim yoga as a safe space for women and a move to decolonise yoga, reclaim yoga for all body sizes and combat racial imbalances and discriminations.  Uma Dinsmore-Tuli (my most influential teacher), writer, activist, radical yogini and yoga therapist, author of Yoni Shakti (order it!) has just launched a movement which I encourage you all to support.

Eradicate abuse of women in yoga: reclaim yoga as a tool for planetary healing and justice.​ www.yonishaktithemovement.com

Postlineage Yoga is here as is a deep inner listening to the needs of the female body. Prenatal yoga is part of this movement. For me, in my work, Prenatal yoga and The Yoga of the Feminine I teach, is not ‘modifying’ yoga for women it is a complete rethinking of what the practices, teaching techniques mean for women in our cyclical wisdom. 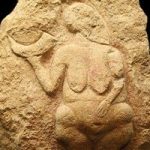 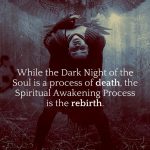