Day 1: Return to the Goddess – Spiritual Pilgrimage to the Mother Land

Day 1: Return to the Goddess

This week is a week off work for me as I journey into the heart of India and it’s goddess temples. This is #returntothegoddess !!!

Recently, with the very first Yoga of the Feminine course, I have been inspired to learn and experience Goddess energy in order to reconnect and awaken ‘shakti’ the inner feminine, the connection to vitality, creativity and life force energy. 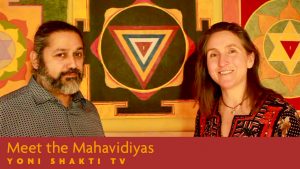 Originally this inspiration started with my work in 2017 with Uma Dinsmore-Tuli and her new Yoga Bible – ‘Yoni Shakti’. It is a momentous work. Instead of their regular configurement, Uma positions the Maha Vidyas, the great wisdom goddesses in line with the female life cycles and stages in quite an astounding and beautiful feminine empowered interpretatio

For the last 5 weeks, I have been working with a rather intimate and incredibly receptive group of women (including my own teacher Certified Ashtanga Yoga teacher Nea Ferrier) at Nilaya House, Dubai. The work is based on my learnings with Uma and centers around a Maha Vidya each week with associated movement, chanting, pranayama, mediation and yoga nidra. I have not been under years of tutelage with a tantric guru to offer this course and much of the work for me is uncharted territory which relies heavily on my 20 years of hatha yoga experience as a sort of framework, and then channels my own mentor’s (Peewee Sanchez or Yogafirst) intuitive and connected teaching. Peewee is supported by Yogi Pradeep Ullal of the Kevala Foundation, who has ‘awakened’ and is channeling, and initiating shaktipat in those who are ‘ready’.

9 ago during my initial teacher training in Goa, I met a woman called Psalm Isadora. Psalm was offering Tantra and was studying with Guru Amritananda Natha Saraswati at the Devipuram Sri Vidya Ashram near Visakhapatnam, Andhra Pradesh, India. 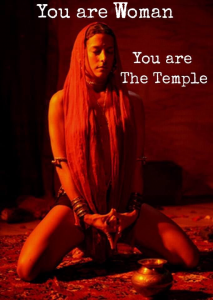 During my course, we were given a solid foundation in pranayama and asana (mostly the Primary Series of Ashtanga Yoga but not exclusively). We studied the traditional Hatha Yoga texts, primarily the Yoga Sutra. It was an excellent 500 hour teacher training and I learnt a great deal from Julie Martin (Brahmani) and her excellent team. Then there was Psalm. I went to her temporary set up in a group of apartments in a house she had called ‘Shakti Bhakti ‘ There was a Chilean California artist Francisco Letelier completing a huge mural of a deity that I cannot remember. She had classes in partner breathing.

You spent 15 minutes seated next to or straddling (seated lap to lap) ‘man to woman’ whilst she guided you through the landscape of pleasure or aversion, to explore what came up as you sat and focused on the breath. It was ‘edgy’ and different and all of the trainees from my class were talking about the classes – more Osho than Patanjali. There was also ecstatic dancing and sufi whirling. I dipped into classes and tried things out and it was certainly an eye opener.

You spent 15 minutes seated next to or straddling (seated lap to lap) ‘man to woman’ whilst she guided you through the landscape of pleasure or aversion, to explore what came up as you sat and focused on the breath. 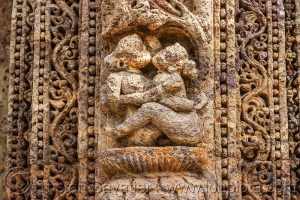 It was ‘edgy’ and different and all of the trinees from my class were talking about the classes – more Osho than Patanjali. There was also ecstatic dancing and sufi whirling. I dipped into classes and tried things out and it was certainly an eye opener. 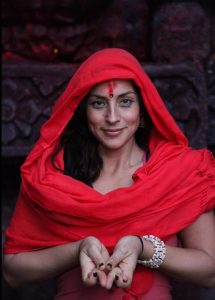 I noticed in the years to come, around 2010-2013, Psalm has started taking groups of people to goddess temples in India.  It was something I would have loved to have joined and looked epic.

So, this is the ‘Return to the Goddess’ tour inspired by Psalm. I am on a 5 day trip which involves 3 domestic flights and one night train; Jaipur, Assam, Madhya Pradesh and Delhi.

Quite an epic trip to be honest. Luckily I have a bit of travel experience here from my years living in Delhi as an English teacher.

So, Day 1. Jaipur. I love this city and have had a sensual, and well, yes I guess I have to admit, sexual love affair with it for many years. I have some good friends here and a lot of history with the place from parties to heady wild nights out. It is quintessential intoxifying Rajasthan of colour and palace; a real delight for the senses not to mention the cornucopia of shopping delights – jewels, fabrics, colour and craft.

I started with a birthday ‘gift to myself’ morning (spa and lunch) in my favourite hotel in the world (Sujan Rajmahal) designed by  Adil Ahmad of Good Earth fame (a top interior store in India).  Indulgence, pure Lakshmi. To appreciate beauty is the feminine, so here I am, admiring the world’s most fabulous décor and eating a Th 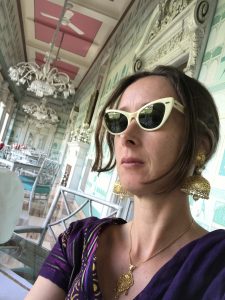 ali fit for the Maharajas.

The Palace used to be the home of the Maharajas, who have now relocated to City Palace and family photos are placed artfully around including images of the handsome now 19 year old Maharaja, Padmanabh Singh ako Pacho Singh. 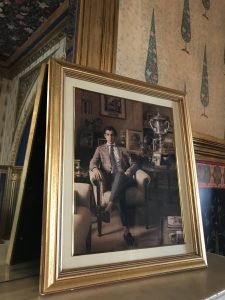 The design is contemporary Indian, all that I love about the ‘nod to heritage, colour explosion, repeat design iconography.

My first chosen Goddess Temple for Jaipur was inspired by, well, a google search! Next to the beautiful Amber Fort in Amer is a temple named the Shila Devi temple. It houses a statue put there by Maharaja Man Singh I in the 16th century. The deity in Shila Devi Temple, in the Amber fort of Jaipur is that of Goddess Kali.  Man Singh was an ardent devotee of shakti cult and invoked the blessings of goddess Kaali during war. 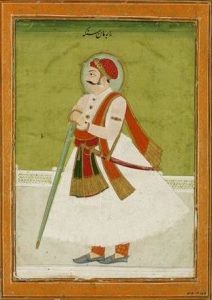 It is said that this shrine was brought by the maharaja from the eastern part of Bengal during the end of 16th century AD. While in a fight with the ruler Kedar the maharaja met with failure for the 1st time. So he worshipped the goddess to bless him with victory. The present stone image of the deity was submerged in the sea in the outward appearance of a slab. It was taken out and by the maharaja and he started worshipping the idol in the name ‘Shila Devi’.  The temple belongs to sect of the shakti or Goddess worship. In Hinduism, there is an idea of the final, non-manifested, supreme form of God. Lord Shiva is ‘Purush Tatva’, a celestial masculine origin of the visible universe. Shakti is the complement of that masculine power in the form of a divine feminine supremacy called ‘prakriti’. It is believed together these two omnipotent supreme powers have created this tinsel universe. This is the reason why shakti is regarded as the mother of the universe. Shakti means a sacred force; a primordial cosmic energy, the Mother of All and  source of cosmic kinetic energy because of whom this illusionary phenomenal world has life and movement.  Shakti is our breath and or movements; our very prana.

On arrival at the temple the first thing that happened was I was informed it was closed until 4pm so I took some time to relax in the gardens at the bottom of the fort. 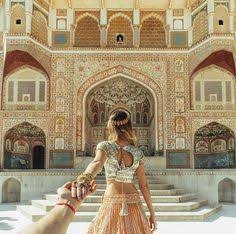 Being Sunday, the visitors were more local than tourist and being a single foreign tourist dressed in a purple and yellow Salwar Kameez and some very large Jumkhi earrings, a kind of a selfie magnet. 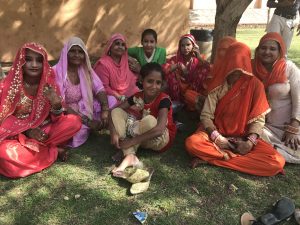 It’s a kind of tourist phenomenon that Indian travellers want to take pictures with tourists.I chatted with a group of women and their children who wanted to take pictures with me. The children were animated and the women, of all ages, sat in a circle chatting and taking in the scenery. The older children sat the baby on a goat for fun, then later on me although he preferred the goat and cried. I sang to the children a little and tried out some crappy Hindi and worked out their ages.

Starting up the climb to the Shila Devi temple, I found the section where you buy items for the offerings and bought a white and crimson mala. Then on approaching the temple, it was like all my ideas of ‘going to Goddess temples in India’ came alive. I approached and was shocked to hear a loud chant of ‘Jai Ma Shakti’ and a huge group gathered around the temple. I asked and it was Navaratri, the Spring or ‘Chaitra’ version (there is another in Autumn.

In front of the temple was a door, silver and carved with goddesses. To the right were all the 10 Maha Vidyas and to the left 9 forms of the Goddess Durga (Nava Durga) including Nav Durga, Brahmacharini, Chandraghanta, Kushmanda, Skandamata, Katyani, Kalratri, Maha Gauri, and Siddhidatri are designed on the silver gate. 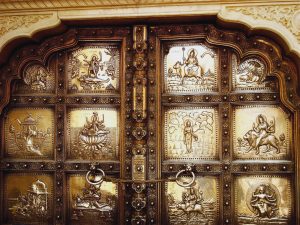 In front of the door was a local woman dressed in red with her tongue out and one fist raised chanting and entranced as the crowd chanted Jai Ma Kali. She then laid down, overwhelmed.

The silver doors opened at 4pm. There was a huge crowd and a lot of police, male and female. The crowd surged into the temple to make their offerings and get close to the central sculpture, the black Shila Devi. It was slightly intimidating, obviously this isn’t orderly queuing land. 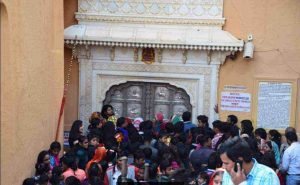 I was slightly concerned about the crowd situation, not in terms of my wallet etc. but more for a random guy just using it as a dodgy opportunity for body contact. Anyhow, all we well, I offered the flowers, glimpsed the goddess, received ‘Prasad’ (ritually blessed sweet halwa) from the very aloof Pundit who was taking the offerings and left via a passageway that was headed back outside to the entrance of the Amer Fort but didn’t go in. It’s beautiful. If I could have the photo of my dream here it would be this one

I looked more carefully at the silver door and the Maha Vidya, especially the ones we had studied in previous weeks. It really was quite something. There were a few thousand people lining up to go into the temple and more chanting, Jai Ma Kali. I took some photos. The climb to the fort also included women offering kirkum, red sandlewood paste to be placed on the third eye and I received this from an elderly woman. I asked another to photograph it to share with you. 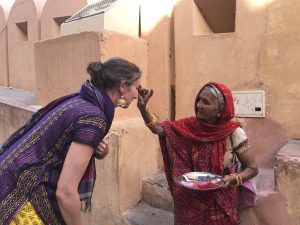 So Day 1, was, on all accounts totally epic. The timing had been perfect. It was unplanned; classic India; the unexpected.

It was everything my heart desired to see and I was taken over by a wash of tears on arrival at the temple. I truly ‘felt’.

I am so excited for the next steps to unfold! 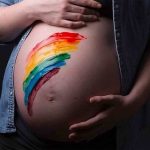 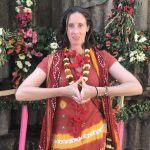 Day 2 – Return to the Goddess – Sacred pilgrimage to IndiaBlog